Meprobamate is generic name of a carbamate derivative used as an anxiolytic drug.
It has properties like sedation, anticonvulsant action and muscle relaxant.

In therapeutic doses there is reduction of anxiety rather than muscle relaxation. Meprobamate has been reported to have anticonvulsant actions against petit mal seizures which is a type of convulsions or fits.

It is still widely used for treating short-term anxiety. It works by affecting certain areas of the brain.

So basically the main use of this medication is an antianxiety agent. It is not only used in the treatment of anxiety disorders but also for the short term management of insomnia.
Meprobamate 400 mg is largely been replaced by the benzodiazepines as benzodiazepines have low level of toxicity at prescribed dose.

The chemical formula of meprobamate is C9H18N2O4.

Mechanism of action of meprobamate

The Meprobamate mechanism of action is not completely known. It has been shown that it has effect on multiple sites in the central nervous system, including the thalamus and limbic system.

It has effects more on the spinal cord than the brain. It is thought to bind with GABA(A) receptors which interrupts neuronal communication in the reticular formation and spinal cord.

This results in sedation and altered perception of pain. The drug also has the ability to activate currents even in the absence of GABA.

This relatively unique property makes meprobamate 400 mg exceptionally dangerous when used in combination with other GABA mediated drugs which including alcohol.

It is also a potent adenosine inhibitor which causes lesser degree of sedation compared to barbiturates.

The most important of the meprobamate uses are the following:

It is used for the short-term relief of anxiety. Its effectiveness for the treatment of anxiety has not been proven. Hence it is not used as often as the benzodiazepines for this purpose.

Like barbiturates it contains analgesic and mild anesthetic properties.
Stopayne capsules used as an analgesic contain meprobamate along with paracetamol or acetaminophen.

It is well absorbed from the gastrointestinal tract. So, the oral tablets are easily absorbed in to the blood stream.

The metabolism of this drug is through the hepatic system that is the liver.

It is excreted from the kidneys.

The plasma half life of this medicine is about 10 hours.

Side Effects of Meprobamate

Over dosage by taking a large number of tablets can result in serious effects. This over dosage and poisoning could be due to two reasons. It could either be accidental poisoning or suicidal attempt by the person.

Such a patient with meprobamate over dosage poisoning should be taken to the emergency department of a hospital immediately for treatment. The following are the symptoms and signs of such an event:

The effects of some drugs can change if you take other drugs or herbal products at the same time.

This can increases your risk for serious side effects or may cause your medications not to work properly.

Let your doctor know if you are taking other products that cause drowsiness including alcohol, antihistamines like cetirizine and diphenhydramine, drugs for sleep or anxiety like such as alprazolam, diazepam, zolpidem, muscle relaxants like such as carisoprodol and narcotic pain relievers such as codeine.

Check the labels on all your medicines for allergy or cough because they may contain ingredients that cause drowsiness. These drug interactions are possible, but do not always occur.

In US it is a Schedule IV drug.

In AU it is a S4 drug available on Prescription only.

In CA it is a Schedule IV medicine.

In DE it is classified as an Anlage II drug. This means it is prohibited to use it.

Meprobamate Dosage is based on your age, medical condition, and response to treatment.

The maximum dose is 2400 mg per day for adults.

This medicine should be used as directed by your doctor. Check the label on the medicine for exact dosing instructions.

How to take Meprobamate

The route of administration of this drug is oral. Meprobamate 400 mg should be taken by mouth with or without food, usually 2 to 4 times daily or as directed by your doctor. Do not crush or chew it before swallowing because of its bitter taste.

If the dose of this medicine is missed then take it as soon as possible. If it is almost time for your next dose then skip the missed dose and go back to your regular dosing schedule. Two doses at a time should not be taken.

Do not increase your dose or take this medication more often than prescribed. Your condition will not improve any faster and serious side effects may be increased.

When the medication is used for a long time, it may not work as well. Your doctor may need to increase your dose or change your medication.

Precautions should be taken before intake of any drug if your are allergic to any drug or food and if you are pregnant or breastfeeding.

Before taking it tell your doctor if you have allergy to drugs like carisoprodol, mebutamate, tybamate, or carbromal or if you have any other allergies.

This product may contain inactive ingredients, which can cause allergic reactions or other problems. Consult your doctor for more details.

This drug may cause dizziness or drowsy. Do not drive or do any activity that requires alertness until you are sure you can perform such activities safely. Avoid alcoholic beverages.

Medication passes into breast milk and may have undesirable effects on a nursing infant. Consult your doctor before breast feeding. 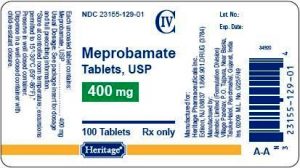 If it has been used regularly for a long time or in high doses then withdrawal symptoms such as vomiting, shakiness, confusion and rarely seizures may occur if you suddenly stop using this medication.

This may be a good place to introduce yourself and your site or include some credits.